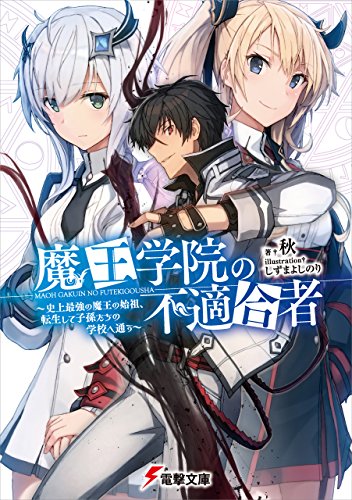 After 2000 years has passed, the ruthless demon lord has just been reincarnated! But his aptitude at an academy for nurturing candidates for demon lords is, “Inept”!?

Having the capability to destroy humans, elementals, and gods, after a long period of countless wars and strife, Arnos the demon lord became sick and tired of all that and longed for a peaceful world, so he decided to reincarnate to the future.

However, what awaited him after his reincarnation is a world too used to peace that his descendants became too weak due to a huge weakening in magical powers.

Arnos enrolled in the Maou Academy established to find any students that might be the demon lord’s reincarnation, but his powers are too extraordinary that those in the academy couldn’t properly judge his powers, so he’s regarded as an “Inept student”. Being underestimated and avoided by most people there, he recruited a girl friendly to him, Misha, as his subordinate and comrade, and strives to climb to the top of the demon race hierarchy to one day reclaim his former title and status.

Maou Gakuin no Futekigousha ~Shijou Saikyou no Maou no Shiso, Tensei shite Shison-tachi no Gakkou e Kayou~
The Student Unsuited for Demon Lord School ~ The Strongest Demon Lord in History, the Founder, Reincarnates and Attends a School With His Descendants ~
魔王学院の不適合者 ～史上最強の魔王の始祖、転生して子孫たちの学校へ通う～